Recent financial reports have revealed that Cyprus has increased its corporate tax rate by the troika. For those who are unaware, the troika comprises of the three most powerful financial organizations in Greece. These are: the EC or European Commission, the IMF or the International Monetary Fund and the ECB or the European Central Bank. These three entities are considered to have the most influence over the country’s financial future insofar as its relationship with the European Union is concerned. The troika are set to increase the corporate tax by 2.5% from the previous 10%. Pressure is also on Cyprus to effect a levy on bank deposits held on the island. The troika is also pressuring Cyprus to put forward a financial transaction tax along with a capital gains one in exchange for a bailout worth 17 billion euro. This amounts to $22.2 billion! 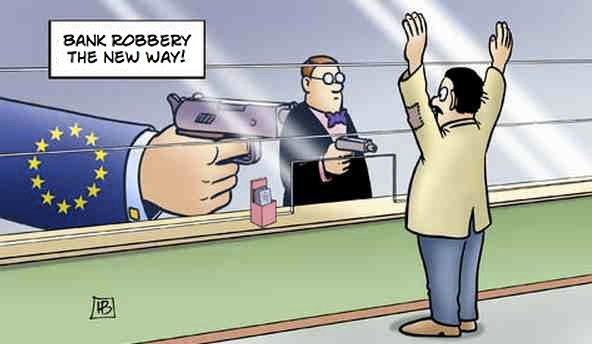 The finance minister agreed to a bailout worth €10bn and also opined that he did not believe that the taxation would affect the island. The Prime Minister also leant weight to this prediction by stating that Cyprus would benefit once its debt is minimized by the EU and that there was no ‘row back’ on any commitments. However, it has been estimated that Cyprus might need an additional €7bn to stabilize itself after taxation, the origination of which is uncertain at best.

There were also discussions regarding raising the tax rate between 12% and 13%. Germany and Netherland are trying to cut down the size of the bailout amount. It is predicted that there is going to be percentage point increase in the corporate tax to collect almost 50 million euro for every year.

Officials also revealed that Nicosia was not opposed to discussing an increase in the tax but is against the introduction of additional taxes. Other measures such as privatising governmental bodies and presenting the EU’s financial transaction tax are also being considered. There has also been a warning which states that cutting bank deposits can ‘force the economy out of the euro zone’.

The current pressure on a corporate tax hike on Cyprus is similar to the one that Ireland underwent before its 2010 bailout came into effect. Similarly, Dublin also came out victorious when it successfully resisted a 12.5% increase in its own tax rates.

The main issue with Cyprus is its consistent exposure to Greek debt. The country was compelled to see to a write down (of over 50%) on its current bonds in a new deal that it agreed to last year.

Whatever the case may be, stabilizing the tax situation is not being considered currently as European states try to come to terms with their own financial crises. On the other hand there have been predictions regarding future talks that will discuss the proximity of economic and political matters especially for euro zone nations.

Another official also states that Russia has shown indications signalling its willingness to contribute to the bailout IF it is offered a creditor status similar to other euro zone partner states. In other words, the nation is asking that it be part of the company that will be paid off as the rest. This will also increase the maturity of the loan. The bailout fund for the elderly namely the European Stability Mechanism says it wants senior status for its own loans. In other words it wants to be considered first before other claims when the time comes to make payments. However, details were not forthcoming.

Yet another official stated that a provisional gains tax spanning three years would contribute an additional EUR250 million for Cyprus’s coffers. The financial tax transaction will also be set as 0.1% for stock and bonds trading while 0.01% will be designated to derivatives. This is in correspondence to the levels practiced by 11 countries in the euro-zone for next year.

According to the deputy chairman of the leading DISY the government needs to make harsh choices in order to prevent the nation from going bankrupt. In order to achieve that scenario certain decisions need to be implemented regarding potential growth. Even if they are a bit drastic they are necessary to ensure Cyprus remains afloat during this financial crisis.

Any questions? Just ask us! »

All your questions answered »